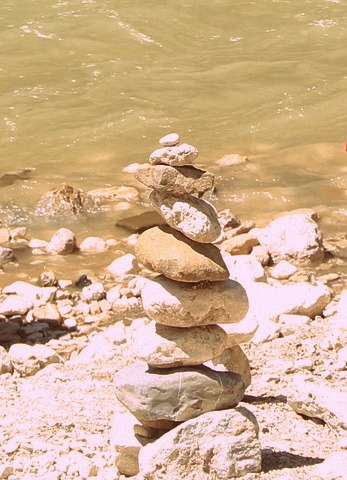 “Every day is Judgement Day. Always has been. Always will be.”
~ Tom Robbins, Skinny Legs and All

I almost didn’t see her.

I sat there, in my teller chair, safely behind bulletproof glass, wishing for 6 o’clock. Outside, the street in front of the bank had just begun to fill up with rush hour traffic, everyone hurrying to get home to dinner, to family, to solitude. It wasn’t always a busy intersection, just three one-way lanes. Most of the day, you could safely cross that street at any point, as long as you were paying attention. Between five and six, your only choice was the crosswalk.

Across from the bank stood a red brick apartment building where I wished I lived. To me, fresh out of college and still living at home, it looked like heaven. Five stories of wide open floor plans and hardwood, balconies, exposed brick and plaster walls – no central air, so windows and doors were often open, music and conversation and the smell of cooking filtering outside through the screens.

The light changed and the cars slowly began to roll forward. Impatient honks drew me out of my daydream and across the street I saw a little girl, still in diapers, bright red hair, barefoot and smiling. Crossing the driveway of my beloved apartment building, her steps slow and wobbly in the way of toddlers.

Getting ready to step into oncoming traffic.

I remember abandoning my shoes and hitting the service entrance door at a dead run, screaming “Stop!” as she reached the curb and, finding it too high to step down, turned around and began to carefully lower herself into the street. The car in the farthest lane saw her and stopped – but she kept going.

I have since mortified my children by bringing the entire population of a McDonald’s play place to a standstill with a single-word shout. On that day, my budding Mom voice was my saving grace.

I crossed two lanes as the approaching cars honked and came to a stop, and I held my arms out and picked up the child that none of them would have been able to see until it was too late. I heard an angry voice say “Watch your goddamn kid, you stupid bitch!!”

My face grew hot, as I worried that everyone watching would think that I was the one to blame. That driver’s rage lit my own. Where was her mother? How could she not know her child had escaped? I took a closer look at the toothless, drooling creature I held, and began to count all the ways that her mother was clearly unfit. She had food around her mouth. Stains on her shirt. No shoes.

A woman came outside to greet me. “Are you looking for her mother? She lives THERE. By HERSELF.” Pointing to the back door of a ground floor apartment, her accusing finger and her tone clearly expressing her feelings about the situation. Now, I would know my enemy.

I peered through the screen door into a kitchen that was blocked off by baby gates and full of toys. My new friend gurgled happily as I knocked. A tiny redhead, younger than I, came to the door. I watched her face as she took it all in. A stranger. Holding her baby. Outside.

“She was in the street.” was all I said. I gestured curtly in the direction of the cars speeding by, in case she missed the point.

She hadn’t. “We have gates up. The door has a lock. I was just in the other room….” She trailed off,  looked at my face for understanding and found none. She opened the door and reached for her baby, who, oblivious to all that had happened, stuck both hands in her mother’s mouth and shrieked with joy.

I turned and stalked away. “Thank you,” I heard faintly, as I turned the corner.

I, a twenty-two year old mother of none, was absolutely certain that I could do better than her. I thought the fact that happenstance allowed me to be part of thwarting a tragedy gave me license to judge. Hadn’t I already done better? I saved her child. I saved her child!

Was this mother negligent? I don’t know. I never saw her again. Maybe this was her wake up call. Interesting, though, how quick someone was, in that pre-internet world, to attack me without knowing the story, and how quick I was to transfer that judgement to the mother, along with everyone else. Was the neighbor watching? How long was she going to wait to interfere? And who stops his car in that situation and doesn’t get out, waiting instead for the crazy barefoot woman to move the obstruction so he can call her a bitch?

This has been an terrible, emotional summer for parents everywhere. A child fell into a gorilla enclosure and thankfully survived. A beloved animal was sacrificed, and the child’s parents were put through hell.

A bit later, there was the incident at Disney, that it hurts me to talk about. So I will not, except to say my heart goes out to those parents.

Two days ago a little boy was killed on the Verruckt – the “world’s largest water slide” – here, in my home state.  I wanted to ride that ride. My son and I made a pact to ride it together when it opened, and never got around to it. It’s easy to say I wouldn’t have, now. I don’t know. I stupidly went looking just long enough to determine that people are spreading misinformation when the truth is horrific enough, and blaming the parents, and the media for “hiding the truth” – as well as citing “privilege” as the reason that the state legislator’s son was allowed to ride in spite of unfounded and irresponsible speculation about his height and weight. Privilege.

Just when I start to recover, the world makes me sick again. Clearly, I need a thicker skin.

These incidents have created an army of flash-mob experts – animal rights activists, parenting gurus, amusement park engineers and social warriors who probably celebrated the summer by, at least once, eating grilled animals while their children ran and climbed and jumped unsupervised around swimming pools and fire and big dogs and sharp objects and rode roller coasters and broke rules with or without their parent’s knowledge. Parents who are more than happy to vilify someone else because it’s an easy, inexpensive way to feel like they are socially conscious. Sanctimony is free.

Years after the day I helped that little girl, when I became a parent, I, the smug hero, would be repeatedly humbled by the quickness and endless innovation of my children. Any parent who says that they have never been schooled by a four year-old – or, for that matter, a ten or fourteen year-old – is either a damn liar or they are delusional.

My kids swim in lakes and ride amusement park rides every summer. I even lost my son at the zoo when he was four. He broke away from me and ran, leaving me and his baby sister and stroller on a crowded bridge.

They ride in cars and buses every day, an act which statistically brings more danger than the zoo, the water and the rides combined. I am afraid for them always; I hear the whistle of fate passing by when I read the news. All I can do is make the best decision I can with the knowledge I have.

I am not saying we don’t have a responsibility to protect our children. I’m saying in our quest to separate ourselves from unimaginable grief, we have lost our hearts.

The difference between a teachable moment and tragedy can sometimes be measured by a stone’s throw.