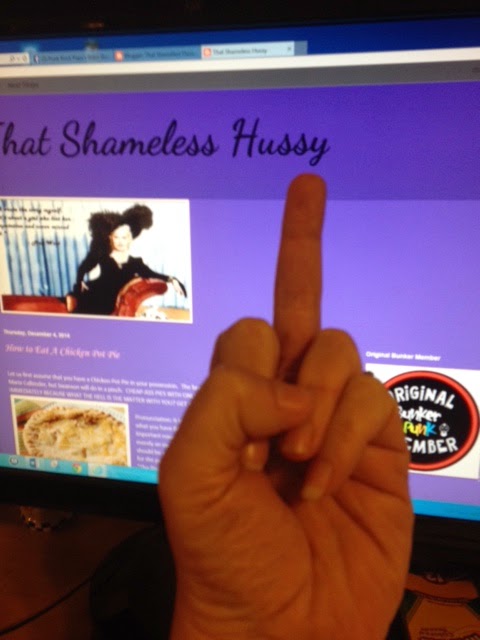 What You Did Today if You Are Me

Funny ’cause I started this post yesterday and I just opened “What You Did Today if You Are Me” to a blank page, which is not totally inaccurate.  It just doesn’t feel like it.

6:30am – Your alarm goes off. At 6:31, it is joined by the alarm on your eight year old daughter’s Kindle, who has snuck in to sleep with you in the middle of the night.

There is a Hello Kitty blanket wrapped around your head.  There is a twenty pound cat being schooled by a five pound kitten at your feet, mostly because the big one would rather absorb the pain than get up.

You feel the same way, so you hit snooze.

7:05 – 7:45 Everyone dresses and gets their own damn poptarts you make a healthy balanced breakfast. You daughter files repeated complaints that her brother keeps “cropdusting” her.  You tell her to cropdust him back, because that’s what you do.

7:45 – Kiss husband goodbye, drive kids to school.  Stand by side of car as your nipples freeze and fall off because 8 year-old has to gather her things and unwrap from a blanket and put on a coat.  Boy gets out and runs inside.  You notice he is only wearing one sock.  You decide it’s not worth it.

7:50 – Kiss daughter goodbye.  Ask your son what happened to his other sock.  He says it’s in his backpack, and that is good enough for you.  Three hours later, you will realize that neither one of them remembered their glasses.

8:00 – Return home and eat some yogurt as the five pound cat tries to ninja stalk it from you.  Squirt cat in the ass with water bottle.  Find more satisfaction in that than you should.

8:10 – Decide to write. Something.  Friend texts that she’s trying to sext her boyfriend but is no good at it.  You advise her to write “Sex now?” with a picture of her boobs and call it a day.  She begs you to write something for her to send him.   You agree with much sighing and eye-rolling.

8:15 – Message back and forth with fellow blogger about how you should write something.

8:27 – Realtor texts that you need to talk about the house you have for sale in the backwater Midwestern town where you lived when you were married the first time.  You cannot sell this house for a dime to a crackhead, and you are going to have to make repairs. You are no longer turned on.

8:29 – Husband texts “How YOU doin?” and you tell him that you are sitting on the bed in a pair of black panties and his favorite push up bra and it’s too bad he can’t come home for lunch.  What you are actually doing: Sitting in front of the computer in a pair of highwater snow pants, geriatric slippers and a tattered T-shirt that says “The Beatings Will Continue Until Morale Improves” and you are picking at a mole.  He wants a pic.  Shit.

8:32 – Run upstairs and strip down to the skivvies, throw on a bra and send the hubs a picture with the caption “Sex now?” and laugh at your own hilarity.  Get dressed and return to computer, dragging warm fuzzy blankie for comfort back to basement.

8:55 – Text back “I’m so sorry. Any chance we can forget about this?”  Fortunately, you already know your realtor is gay, so it is likely he texted you from the fetal position in the corner of his office where he just finished vomiting in the trash can.  Now you can write for a bit.

9:15 – Receive text from former boyfriend.  He is in the middle of a messy divorce, and you have stayed close and he values your opinion.  Each and every time you say it.

10:00 – Hubs texts, wondering where his picture is.  You re-send it to him, carefully verifying the recipient first.

10:05 – Realize your friend’s boyfriend has inadvertently turned you on again.  Dammit.

10:15 – Notice you’ve received multiple texts from the former boyfriend and he now thinks you are ignoring him.  He hints that he is afraid this is awkward for you.  This is the least awkward thing that has happened today.

10:20 – Send text to former boyfriend reiterating the same advice: “I know this is not easy.  You have to do what is best for you and your kids.  Drop the hammer.  Like constipation, this doesn’t get better if you wait.”

10:45 – Start to write, think about how the kids looked as you dropped them off this morning and realize neither of them remembered their glasses.  Bloody Hell!

11:30 – Hubs calls, presumably because he’s coming home for lunch but you miss it because you left the phone in the basement.  Realize you aren’t even remotely turned on anymore.  And you are back in the snow pants and slipper ensemble.

11:35 – Realize you haven’t done anything demonstrably productive today.  Quickly move laundry to dryer, and new load in washer.  Make a quick check of the kids rooms for dirty dishes.  You find a bowl of Ramen broth in the boy’s, so you take it downstairs.  Fucking ninja cat trips you and covers you and the floor in week-old Ramen broth, which she then eats.

11:36 – As you race by the front door to shower, it opens and in walks the hubs.  You look like a homeless mental patient who stole a midget’s snow pants and you smell like dead salty chicken.

Not surprisingly, he still wants sex.

8 thoughts on “What You Did Today if You Are Me”